Kolkata is one city that proudly boasts about its grandeur in art and heritage. A city that has never failed to impress the world with its legacy of music and literacy, also fascinates everyone with its grand celebration of Durga Puja.

The city of joythat has won millions of hearts just by its rosogullas and Rabindrasangeet is also a treasure box of incredible art galleries and architectural marvels. One of the busiest cities of the country, it offers many charming beauties like a ride on a tram and a spiritual seeking at Kalighat. 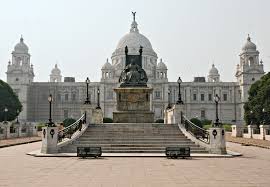 A place that despite being overcrowded and jammed with traffic, offers so much of love and warmth that has uplifted its popularity in no time. Here are the five smashing places of Kolkata that are the must to visit places of the city.

Let’s explore the five prominent tourist places in Kolkatathat can blow the mind of its guests in no time.

As much as the pub culture of Kolkata is infectious, so is its attractive temples that offer serenity in abundance. One such divine beauty is the impressive Kali temple of Kolkata that is nestled at the ghats (bank) of Ganges. The tranquility one could experience while sitting near the flowing Ganga is worth to mention.

The Dakshineswar Kali temple is inspired by the Navaratna style of Bengali architecture and allures thousands of devotees every day. It is very close to the Belur Math, which is the headquarters of Ramakrishna Paramhansa’s Math and is highly popular amongst the spiritual seekers.

An architectural marvel that was built to commemorate Queen Victoria is definitely one of the must to visit places in Kolkata. Inspired mainly by the British and Islamic architectural styles, the building is the home to many well-maintained gardens to awe-inspiring artifacts and paintings. The white marble beauty also flaunts its incredible collection of stamps, weapons, and other things used in the pre-independence period.

The bridge that connects the city with its twin city of Howrah, is no less than a masterpiece created by the British. Enjoying a length of 1528 ft, the Howrah bridge looks even more spectacular with its lights on. Popularly known as the RabindraSetu, it is one of the oldest bridges of Kolkata.

Just a word of caution would be to avoid driving on the bridge if you are on a time crunch as it expects a pretty good amount of traffic on regular days.

Respiting a fresh air is instead a luxurious act in the bustling city of Kolkata. Yet, the city does not disappoint its guests by offering a bunch of beautiful gardens called Botanical garden. Alternatively known as the Acharya Jagdish Chandra Bose Indian botanical garden, it presents a gorgeous collection of orchids and more than 12000 varieties of plants collected from all over the world to its viewers.

Housing a ton of gorgeous flowers, this visual delight is a great place to attain some peace.

Birla temple is an outstanding place to experience the artistic grandeur of the city. It is a Hindu temple where Lord Krishna is worshipped and is liked by its travelers for the peaceful ambiance it provides. Its marvellous architecture is a beauty to behold with.

Alternatively, the Indian Museum (the largest museum in our country), St. Paul’s Cathedral church, JorasankoThakurbari (ancestral house of Rabindra Nath Tagore), William Fort, Marble Palace, Birla Planetarium and the new market for shopping are few attractions that one can think to add in his travel list.

About the Author: SamudrikaPattanaik- A fun loving talkative bird who loves to express through her writings. She is a fitness enthusiast, a travel wanderer and a true Sagitarian 🙂 She is a freelance blogger and writes travel blog on TravelEscape.